By 2035, more than one in five people in the USA will be aged 65 and older and one in three households will be headed by someone in that age group, according to Projections and Implications for Housing a Growing Population: Older Adults 2015-2035, a report released last week by the Harvard Joint Center for Housing Studies.

According to the report, as the baby boom generation ages, the US population aged 65 and over is expected to grow from 48 million to 79 million, and the number of households headed by someone over 65 will increase by 66 percent, to nearly 50 million. This growth will increase the demand for housing units with universal design elements such as zero-step entrances, single-floor living, and wide halls and doorways. However, only 3.5
percent of homes offer all three of these features.

Read more: The International Design for All Foundation Awards 2016 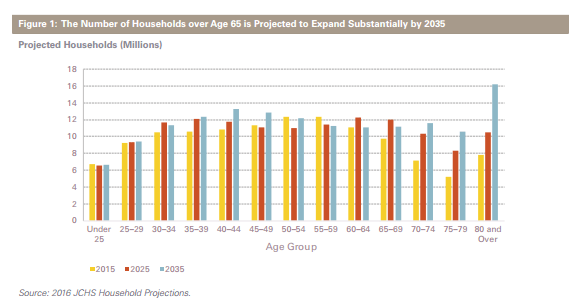 “The housing implications of this surge in the older adult population are many,” says Chris Herbert, managing director of the Harvard Joint Center for Housing Studies. “and call for innovative approaches to respond to growing need for housing that is affordable, accessible and linked to supportive services that will grow exponentially over the next two decades.”

8.6 million people will be paying more than half their income for housing by 2035 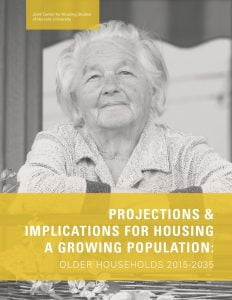 In the coming years, many older adults will have the financial means to pay for appropriate housing and supportive services that allow them to live longer in their own homes. However, many others will face financial hardships, particularly because their incomes will decline in retirement. Low-income renters are particularly vulnerable, notes the report, which projects that nearly 6.4 million low-income renters will be paying more than 30 percent of their income for housing by 2035.

The report adds that 11 million homeowners will also be in this position by that time. In total, the report estimates, 8.6 million people will be paying more than half their income for housing by 2035. The report also projects that 7.6 million older adults will have incomes that would qualify them for federal rental subsidies by 2035, an increase of 90 percent from 2013.

“Today, however, we only serve one-third of those who qualify for assistance,” says Jennifer Molinsky, a senior research associate at the Joint Center and lead author of the report. “Just continuing at this rate—which would be a stretch—would leave 4.9 million people to find affordable housing in the private market.”

Older adults express a strong desire to live at home 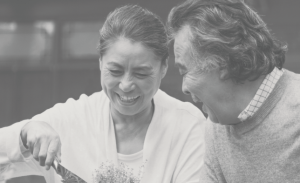 The report notes that in many surveys, older adults express a strong desire to live at home for as long as possible. Achieving that goal will require public and private action to support modifications to existing homes, take steps to address the affordability challenges facing both owners and renters, and adapting the health care system to enhance service delivery in the home. There is also a need to expand the range of housing options available to better meet the needs of an aging population and improve options for older adults to remain in their community when their current home is no longer suitable.

Read more: Ageing in place: how to adapt your home?

“Right now, more than 19 million older adults live in unaffordable or inadequate housing, and that problem will only grow worse in the next two decades as our population ages,” says Lisa Marsh Ryerson, president of AARP  foundation, which provided funding for the report.