More than 50 years. That is what it took for Amy Cranton to obtain her bachelor’s degree. Freshly graduated from the Southern New Hampshire University with her Bachelor of Arts in Creative Writing and English, she can be proud to say that she accomplished a dream brutally stopped in 1962. 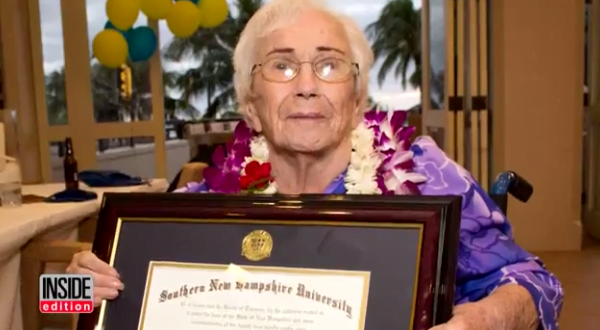 The story of Amy Cranton

In 1962, Amy Cranton joined college and started pursuing a bachelor’s degree. But just few months later she had to quit, so she could find a job to take care of her 4 children and raise her family after a divorce.

Then, when her children were eventually old enough to live by themselves, and when she retired, Amy had plenty of time. Too much time actually. “I couldn’t see just sitting there watching Netflix all the time,” she said in a video provided by SNHU.

So, in 2013, she decided to go back to what she stopped 50 years before, and what became a dream. Indeed, she made the decision to go back to school, by enrolling in Southern New Hampshire University’s online degree program.

She now holds a degree in creative writing and English since last January, and she does not want to stop : “I feel like I’m still on the road. I have more to learn,” she said. She enrolled in a master’s degree, she already started classes there and everything seems doing good for her. “As long as I get good grades, I’ll be happy,” she said.

This success goes further than getting a diploma. It is about learning. It is never too late to learn something. Furthermore, it is a proof of abnegation and courage, a symbol for everybody (older, younger, damaged, disabled,..). It promotes self-confidence, and it tells you to believe in your dreams and your chances to reach them. It is never too late to make your dreams come true.