Japan still has the oldest population in the world: 25% of Japanese people are indeed over 65. In that regard, following a partnership between Apple, IBM and Japan Post Group, 5 millions of Japanese seniors should be equipped with iPad tablets by 2020. 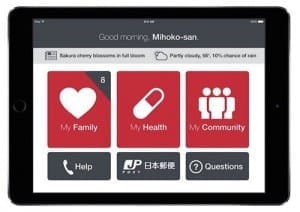 With this partnership, Apple, IBM and Japan Post Groupe wish to improve the quality of life of seniors in Japan. In order to do that, tablets will be specially distributed to seniors: these tablets will have dedicated applications installed, which aim to directly answer seniors’ needs. For instance, they will help monitoring one’s health – with reminders to take medication, accesses to nutrition or exercising programs… – to stay in touch with relatives, or even to access certain services like shopping services.  IBM is in charge of developing these apps with special features such as simplified user interfaces, special fonts, etc…

Japan Post Group has already developed other programs dedicated to seniors’ well-being. In late 2013, they launched the “Watch Over” program, which as the name implies, has employees making sure older people are doing well in their homes and giving necessary information to their families.

A pilot project of the Apple – IBM – Japan Post Group partnership will be launched in Fall 2015: 1.000 tablets will be held out for free all over Japan in addition to Watch Over services.

Eventually, the program aims to hand out iPads to 5 millions of Japanese elder people by 2020. The Japanese population accounts for 125 millions people: 40% of them should be over 65 by 2050.

CEO of Apple Tim Cook has underlined that “This initiative has potential for global impact, as many countries face the challenge of supporting an aging population, and we are honored to be involved in supporting Japan’s senior citizens and helping enrich their lives”.  The percentage of older people indeed keeps growing everywhere in the world, and 40% of seniors currently live either alone or only with their spouse.

Apple wished to develop the program to address this global priority in Japan: could this kind of partnership be extended to other countries in the future?

President, Chairman and CEO of IBM Ginni Rometty explains that “the potential we see here—as broad as national economics and as specific as the quality of life of individuals and their families—is one example of the potential of mobile-led transformation anywhere in the world where issues of an aging population exist.”

Apple and IBM have already established partnerships based on health issues in the past. For instance, they created Watson Health Cloud, which is a plateform aiming to gather all health data registered in Apple devices.