Eyeprotec is Singapore based company providing a 24/7 online service via a mobile app which is used to immediately alert emergency services in case of a significant event, as well as Eyeprotec users who can provide active immediate support.

This security tool also offers for a minimum cost, 3 types of personal security services accessible to everyone. Since its launch in France in November 2016, more than 3500 people have registered on EyeProtec. 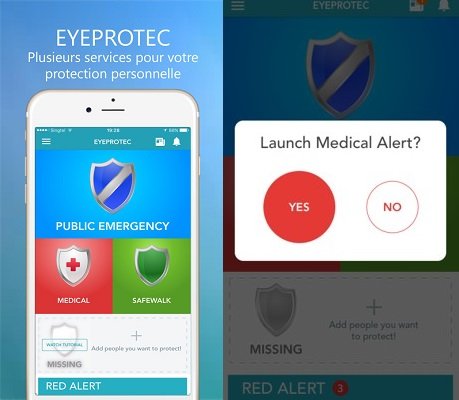 “Our main purpose is to actively contribute to the public security thereby to significantly shorten the respond time of emergency services to avoid tragic accidents” said Frederic Biondi, co-founder of EyeProtec.

Public security is one major concern of French people: “52% of them would like to see a higher involvement in such domain from the government” ( 2016 Public Services Barometer, published by Paul Delouvrier Institute).

The last 2 years’ tragic events in France reinforced such opinions and raised concerns regarding security.

Read more: The 5 most common Internet security mistakes made by elderly people

EyeProtec has developed a user friendly, easy to use mobile app and available to everyone

On top of a free of charge “Public Emergengy” service, Eyeprotec also offers three personal security services very affordable which allow every user to access to a dedicated and personal 24/7 services, chosen based on the situation encountered.

Every alert is received by security officers on an online security platform which displays the profile and the exact location of the alert sender. After having followed a strict protocol of confirmation, security officers dispatch the information to the relevant emergency service and stay in contact with the user until the end of the alert.

One of the majors features of EyeProtec is that by pushing one button, all relevant informations are sent in one shot (photo, phone number, location, etc.). In many cases, it is simply not possible to call the Police and EyeProtec offers a solution to this problem.

An International, National but also local concept of social collaboration

This service, triggered in case a of major event (Terrorism, Natural Disaster) allows every user to be localized and to alert Eyeprotec coordination centre about the situation. Using the information gathered from users and from other sources, EyeProtec will then broadcast a global alert to all users near by the location of the event.

All alerts received are managed individually and an appropriated response is given to the alert sender depending on his current situation (advices, information, dispatching of the alert to the emergency service, etc..).

Whether the user feels or is unsafe, he simply presses the Shield of the SafeWalk service and to hold it pressed until he reaches his destination. In doing so, the Eyeprotec tracking service is activated. Security officers follow the journey on the screen until the user is safe.

If it happens that the user is threatened, by simply releasing the finger from the shield, the alert activates itself within 10 seconds and the Police is informed about the situation immediately by Eyeprotec coordination centre. The location of the alert sender is also sent by SMS.

In case of a Medical Emergency, Eyeprotec security officers send the relevant rescuers. All necessary information (current medication, significant medical disease, etc) are send by the push of a button and they are immediately dispatched by EyeProtec.

Also, rescue trained EyeProtec users nearby are alerted and can provide the first aid before the emergency services reach the victim. They are supported by Eyeprotec coordination centre.

This service allows EyeProtec users to send an alert when someone goes missing. The alert contains the profile of the missing person (photo, age, description, etc,) and is received by the coordination center as well as all EyeProtec users nearby.

Immediately the security officers start the coordination of the searches and informes the police of the situation. This allows the alert sender to stay focus on the search of his loved one as EyeProtec take care of the rest. When the missing person is found, EyeProtec security officer contacts all parties to set a point to meet up.