We are never too old to travel, and Yelena Yerkhova, a 89-year-old Russian grandmother  is the living proof of that. She has traveled alone ever since she was 83 to discover new cultures and news countries. She recently returned from Vietnam and Israel, and obviously posted pictures on her favorite social network : Instagram. 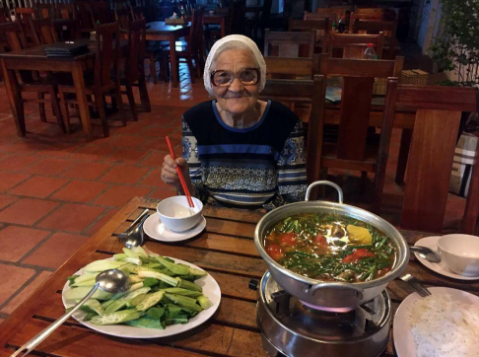 Yelena Yerkhova or Grandma Lena, as she prefers to be named, lives in Krasnoyarsk, Siberia. She began travelling at the age of 83 as she was unable to do it before (work commitments, the falling of the Iron Curtain…).

The Russian grandmother receives a pension for serving as a home front worker during World War II. She spends around $155 per month to fund her travels. On the side, she cultivates and sells her own flowers and sews for people. “I’ve started living for real only now” told the 89-year-old grandmother.

Read more : Trips and entertainment for the elderly

Grandma Lena has mostly traveled to the Czech Republic but she has also been to Germany, and plans to visit Italy or the Dominican Republic for her 90th birthday.

In Vietnam, this adventurous 89-year-old Instagranny rode a moped, drank cocktails and tasted the local delicacies. She has also taken a camel ride in Israel.

Wherever she goes, she gets to make friends and receive help from local people who offer her food and drink.

Grandma Lena is now known for her Instagram account. Her travels are going to increase because, as her fame is spreading, tour operators are offering her cheap travels !

Russian commercial bank, Sberbank, have also promised her a trip to anywhere in the world. Grandma Lena is not perturbed : “I’m happy that they made me famous throughout the country” she said. To be continued…

Read more : The portion of seniors on Facebook has increased by 80% in 3 years