Every 68 seconds, someone develops Alzheimer’s disease. It is often called a family disease, because the chronic stress of watching a loved one slowly decline affects everyone. 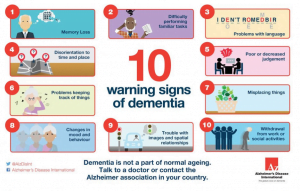 World alzheimer’s dayAt current rates, experts believe the number of Americans living with Alzheimer’s will quadruple to as many as 16 million by the year 2050.

There are over 100 forms of dementia. The most well-known form of dementia is Alzheimer’s disease, which accounts for 50-60% of all cases.