The 5th International Conference on Frailty and Sarcopenia Research (ICFSR) will be held on April 28th – 29th, 2016 at the Pennsylvania Convention Center in Philadelphia, USA. During the two-day conference, researchers from all around the world are exposing their results regarding frailty and Sarcopenia. 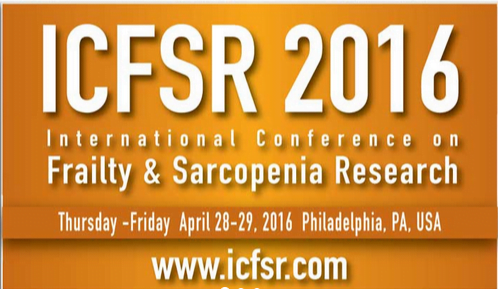 What are frailty and sarcopenia?

Frailty is a clinical syndrome, generally affecting older people. It is most commonly associated to a general state of weakness – low physical activity, slow performance, long-term fatigue etc. Therefore, the elderly suffering from frailty are less likely to live an independent, autonomous life, as they are in a constant need to be helped on their daily routine.

Sarcopenia is one of the major components of frailty. It is a geriatric syndrome characterized by the progressive loss of muscle mass and strength with a risk of adverse outcomes for the patients.

Abstracts will be published on the Journal of Frailty and Ageing. The deadline for submitting an oral communication, poster presentations or symposia is 23rd of November 2015.

During the last 4th edition, held on April 2015 in Boston, researchers reached out several conclusions able to improve the elderly welfare and well-being.

The main objective is to raise awareness on the impact that Frailty is taking on the Elderly physical and moral condition.

Where – the Pennsylvania Convention Center in Philadelphia, PA, USA.