Japanese researcher Yoshinori Ohsumi received the Nobel Prize in Physiology or Medicine on Monday. His research topic : autophagy, the process through which body cells recycle their own content, which is critical in preventing damage and age-related disorders such as Parkinson’s disease. 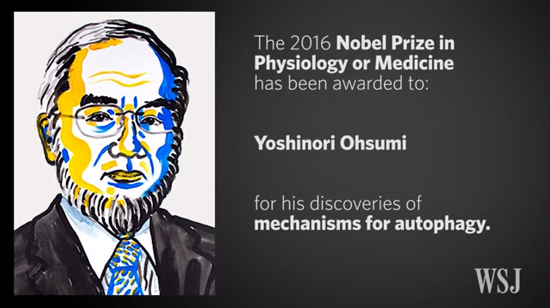 The word autophagy derives from the Greek word “auto”, meaning “self”, and phagein, “eating” ; it describes the process through which body cells recycle their own content, getting rid of harmful and unnecessary components.

Since 1988, autophagy has been the main focus of Japanese researcher Yoshinori Ohsumi. The phenomenon is notoriously difficult to study, but Ohsumi was able to identify the genes involved in the process in the early 1990’s, through a series of experiments. He then managed to pinpoint its opus moderandi in yeast cells, showing later that the same mechanisms applied to human cells ; his efforts earned him the Nobel Prize in Physiology or Medicine, which he received on Monday.

His thoughts ? “All I can say is, it’s such an honor,” he declared to reporters, according to Japanese broadcaster NHK. “I’d like to tell young people that not all can be successful in science, but it’s important to rise to the challenge.”

Research shows that disrupted autophagy results in cell damage and ageing. It is also linked with several age-related diseases, such as Parkinson’s, type 2 diabetes, and other disorders commonly found among the elderly. Seen in this light, Mr Ohsumi’s research could hold the keys to curing those disorders, by stimulating autophagy where the process is disrupted, or even by preventing those disruptions from occurring in the first place.

Yoshinori Ohsumi received the Nobel Prize in Physiology or Medicine :