Communications strategy expert Sparkler recently conducted a study on empowerment and modern technologies for Facebook IQ. It found that people aged 45 to 70 may find life more fulfilling than other generations, in more ways than one.

Retirement, the golden age of finances

Facebook IQ recently called on communications strategy expert Sparkler to gauge the influence of new technologies on quality of life : it surveyed 2 5554 people aged 45 to 70 year old, in France, Italy and the United Kingdom in order to get a better view of their perception of ageing and their attitude towards technology. For comparison’s sake, 452 people aged 18 to 34, (Generation Y) and 464 Generation Xers were also surveyed. 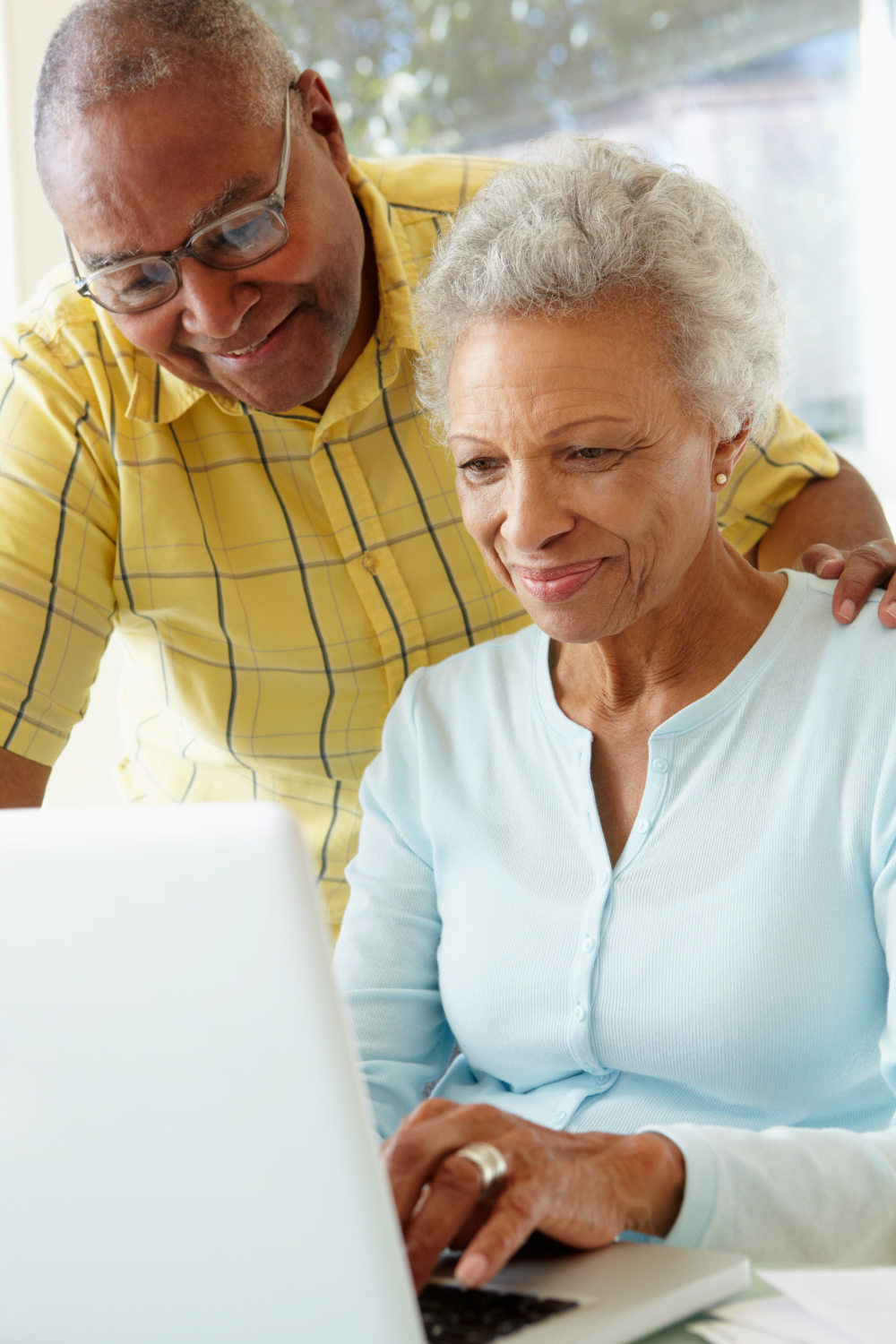 The golden area of your life might not necessarily be your youth, as many people would tend to think. Many people aged 45 to 70 (“45up”) agree to say they’d never felt so self-confident or freer to pursue their own ambitions than when they were creeping on forty: 74% of 45ups report feeling fulfilled. Finances are also looking up : 84% own their own house, and 51% say they don’t have to worry about money. With good reason : they make up 48% of the world’s population but account for 82% of the world’s financial wealth.

People aged 45 to 70 are active and tech-savvy

Contrary to popular beliefs, retirement age is not (or no longer) an empty period in people’s lives. “45up” (people aged 45 to 70) are showing a rather enterprising spirit : 61% of them say they still feel passionate about their careers, and do not intend to stop any time soon. 3 out of 5 said they intended to use newly found free time and buying power to pursue personal goals or projects. And this ambition is not limited to professional endeavours : while some seniors feel driven to create their own company, others only wish to travel and learn.

This entrepreneuring spirit also manifests itself in the form of substantial financial investments ; 45ups, contrary to their parents, believe in spending for their own entertainment. 50% of them said they wanted to spend their money while they still can. They also know how best to use technology in that area : 89% use digital resources and devices to help them manage their budget, and 75% got into the habit of booking vacations online. 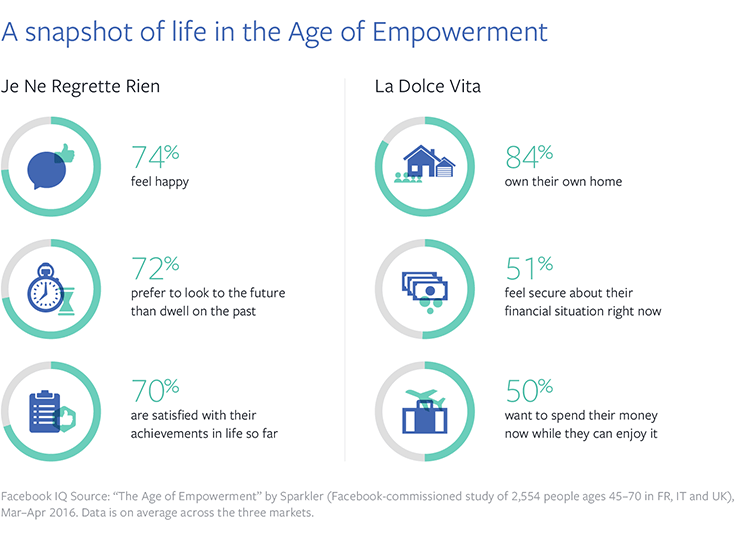 Most of them say they are now able to afford quality products, but 54% were still interested in a good bargain and paid close attention to value for money.

Intergenerational influences have grown stronger, perhaps owing to the fact that children now tend to leave home later. As a result, the digital divide is felt less keenly. 45ups appreciate technology just as much as Millennials, and their online presence grows ever stronger. 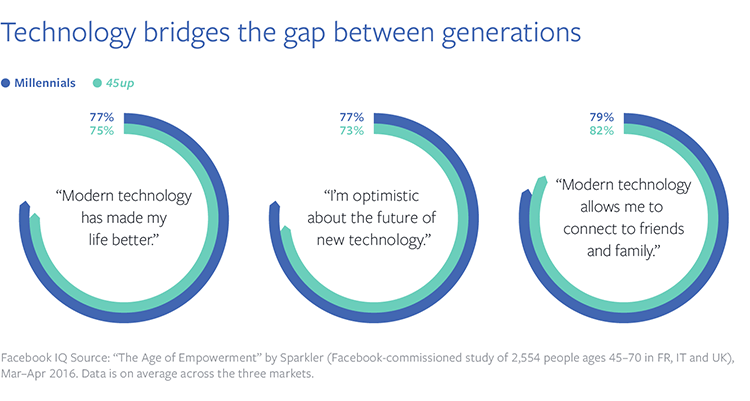 Differences are still felt in other areas : for instances, Millennials are 3,4 times more likely to worry about housing conditions.

79% of 45ups pay attention to what they eat and exercise regularly, and 67% report feeling healthy. One out of 5 uses applications or devices to help them keep track of their exercising performance. But they also put great stock in their mental health, adopting a holistic approach to feeling good: “I’m curious about everything. I need to take care of my body so it can keep up with my mind“, said one of the surveyees, a 63 Frenchman called Jean.

The majority of 45ups report not feeling stressed in their daily lives ; there are a few exceptions to the overall tendency, with some Generation Xers feeling pressured due to their unique position : they need to care for both dependent parents and children, offering both financial and emotional support ; as a result, they are 1,31 times as likely to worry about their financial situation and 2,10 times as likely to worry about their children than Millennials. 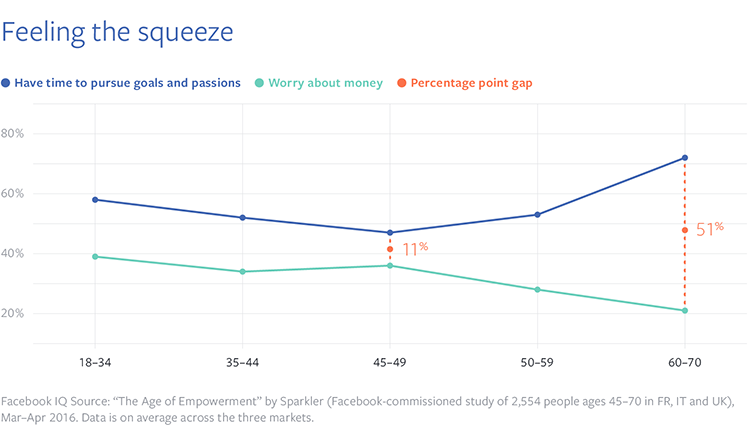