The 2018 Ageing Report, published in May 2018, shows that fiscal costs linked to pensions, health care and long-term care are expected to rise over the coming decades, as Europe’s population continues to age significantly.

The Ageing Report is published every three years by the Ageing Working Group of the Economic Policy Committee (EPC) and the European Commission’s Directorate-General for Economic and Financial Affairs (DG ECFIN) based on a mandate by the Council. The report complements the analysis of the 2018 Pension Adequacy Report by the Social Protection Committee, which assesses how past key reform measures aimed at securing adequate and financially sustainable pensions, and identifies further reform needs.

The Ageing Report feeds into a variety of policy debates and processes at EU level, including the overarching Europe 2020 strategy for smart, sustainable and inclusive growth. In particular, they are used in the context of the European Semester to identify policy challenges, among others in setting the medium-term budgetary objectives (MTOs), in the annual assessment of the sustainability of public finances carried out as part of the Stability and Growth Pact, and in the analysis on the impact of ageing populations on the labour market and potential economic growth.

Europe’s population is getting older

The ageing of Europe’s population will also have significant implications for its labour force. While the total supply of labour in the EU among those aged 20 to 64 is expected to fall by 9.6% between 2016 and 2070 (9.7% in the euro area), labour force participation rates are projected to rise from 77.5% in 2016 to 80.7% in 2070. This increase is particularly apparent among women and older workers. 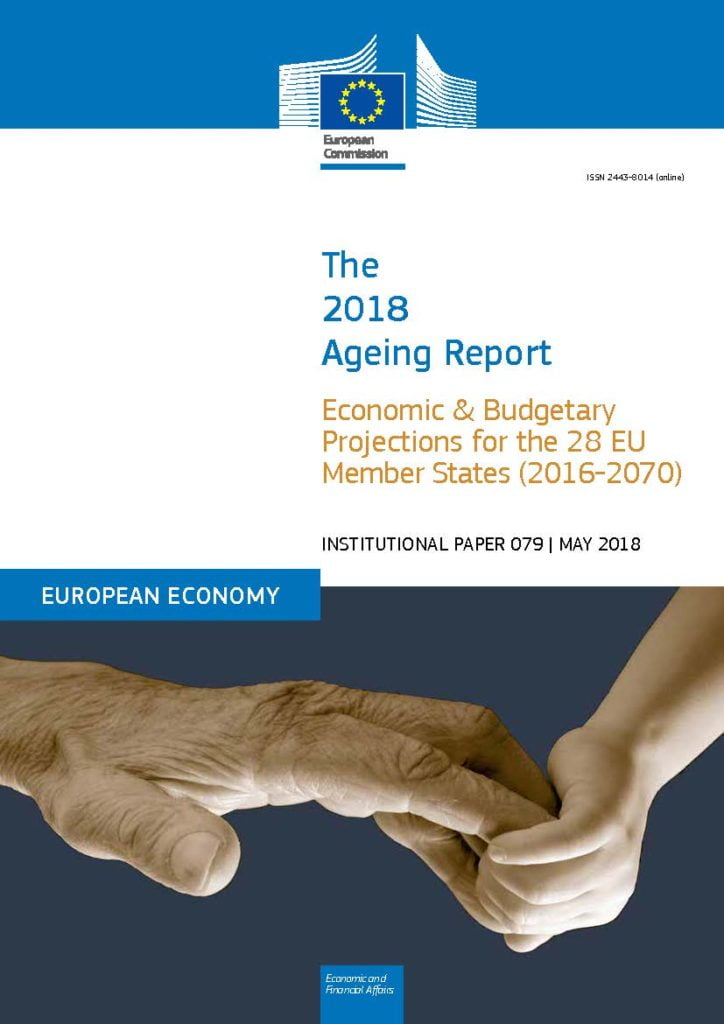 The fiscal impact of ageing is projected to be a significant challenge in almost all Member States, with effects already becoming apparent over the course of the next two decades.

Overall in the EU, the total cost of ageing (public spending on pensions, health care, long-term care, education and unemployment benefits), is expected to increase by 1.7 percentage points to 26.7% of GDP between 2016 and 2070.

Long-term care and health care costs are expected to contribute the most to the rise in age-related spending, increasing by 2.1 percentage points. Public spending on pensions is expected to rise up until 2040 before returning close to current levels by 2070. Education expenditure is projected to remain unchanged by 2070. Unemployment benefit expenditure is projected to decline by 0.2 percentage points.

Pension reforms have made it possible to stabilise public pension spending as a share of GDP over the long term, through increases in the retirement age and changes to the parameters of pension systems, including pension indexation. As a result, the public pension benefit ratio, which describes the average public pension in relation to the average wage, is projected to fall by 10.6 percentage points on average in the EU. In Member States with supplementary private pension schemes, the total value of pensions relative to average wages is projected to be 10.5 percentage points higher than in Member States without. Moreover, retirement ages will be higher in the future in general.