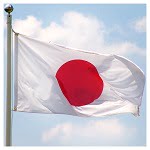 Japan is one of the countries who currently faces a very fast aging of its population, as about a quarter are aged over 64.